Bandit’s Story: A Case Study from the AERA Surgery Team

After two weeks of inappetence and lethargy, Bandit's parents decided it was time to bring the 14 year-old cocker spaniel to the hospital, as, even for an old guy, Bandit was just not himself. A thorough work-up by our Emergency Service revealed that Bandit had a suspected gallbladder mucocele. Additionally, Bandit had advanced heart disease. Medical management of Bandit’s gallbladder disease was attempted, but to no avail, and in fact, his condition worsened. Surgical intervention was Bandit’s only option to return to his normal self. But gallbladder removal is a risky procedure for any dog, never mind a geriatric pup with heart disease.

Lucky for Bandit, his parents were not deterred by the prognosis. And so, with Dr. Brian Brophy at the helm, the Surgery team took on the challenge of removing Bandit’s gallbladder. Our nurse anesthetists guided Bandit through the procedure, and his gallbladder was removed smoothly and successfully. Bandit recovered surprisingly well over the first few hours. But then came the first night, and it became clear that Bandit was in for the fight of his life. Over the next 11 days, our team of surgical and ICU nurses cared lovingly for Bandit, helping him battle serious post-op complications. Systemic weakness required the placement of a jugular catheter, and doctors and nurses from several in-hospital specialties joined forces to manage daily struggles with edema, ascites, anorexia (requiring a feeding tube), heart failure and pulmonary hypertension.

Against all odds, Bandit pranced out of AERA’s front doors with pep in his step, one day shy of a full two-week stay. There was nary a dry eye in the hospital as we bade him and his grateful pet parents goodbye. We wish Bandit's family good health, fun walks, tail wags and doggy snuggles. 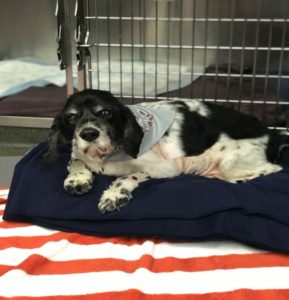