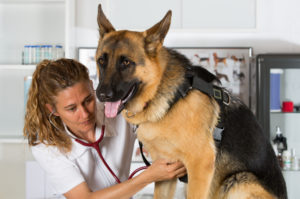 Like humans, pets tend to respond better to cancer treatments when they are diagnosed early. Our hope is that the following information helps pet owners notice the symptoms and signs of cancer in their dog or cat early on. Faster and earlier detections often lead to earlier cancer screenings, which in turn leads to better odds for remission.

Symptoms of Cancer in Dogs

Cancer is one of those diseases that isn’t always obvious—especially in animals. Since your dog can’t tell you when something feels off, you need to know some of the possible symptoms to look for in your dog. Cancer symptoms may include:

AERA urges dog owners who notice any of these symptoms to take their dogs to a veterinarian right away to be fully evaluated and possibly screened for cancer. Early detection leads to better results from treatments in most cases, so keep an eye on your pets to catch any of the above behaviors or symptoms early on.

Every cancer has different risks, treatments, and remission rates. The following cancers are the three most commonly found in dogs.

Canine lymphoma is one of the most common cancers in dogs. It occurs between two and five times as often in dogs as it does in humans. Generally, lymphoma is diagnosed in dogs between six and nine years old. This type of cancer can affect the immune system and cause swollen lymph nodes as well as other signs.

Hemangiosarcoma is a particularly malignant type of cancer that affects the spleen, liver, or heart, but quickly travels to other organs as well. With this cancer, it is much more difficult for owners to realize something is wrong, which leads to a late diagnosis. Late diagnoses often give cancer enough time to spread, making treatment more difficult. German shepherds, golden retrievers, and other large breeds are more prone to hemangiosarcoma.

Mast cell tumors are the most common malignant skin tumors in dogs, as well as the most common tumors found in dogs in general. Mast cell tumors usually form as lumps on the skin, which makes them fairly easy to spot in most cases. Generally, these tumors are found in dogs older than eight. Boxers, pugs, Boston terriers, and a few other breeds are predisposed to these tumors.

While these are the three most common types of cancer in dogs, that doesn’t mean other cancers aren’t just as critical. If you notice any of the previously mentioned possible signs of cancer, AERA advises you to bring your pet to a veterinarian for a full evaluation and possible screening as soon as possible.

Symptoms of Cancer in Cats

For cats, cancer symptoms can be difficult to notice. Cats are generally very private creatures, and they tend to hide disease better than humans and dogs. There are a few possible symptoms of cancer in cats that you may notice, however, including:

While it is more difficult to notice symptoms of disease in cats, if you start to notice any unusual behavior, you may want to go ahead and bring your pet to the veterinarian for an exam. If a veterinarian notices anything unusual, he or she can decide whether or not to screen for cancer or refer you to an oncologist.

Cats may be subject to a variety of different cancers, but there are three very common types of feline cancer that you should be aware of.

Feline lymphoma is the most common type of cancer found in cats. It accounts for a third of all malignancies found in cats, and it can occur in various locations throughout the body including the kidneys, gastrointestinal tract, and spleen. Lymphoma often causes cats to lose weight, vomit, become lethargic, have diarrhea, and become excessively thirsty.

Mammary gland tumors are the third most common type of tumor seen in cats, and 85 percent of the mammary tumors found will be malignant. This aggressive type of cancer is often found in middle-aged and older felines. Siamese cats have a higher risk for developing mammary tumors. Studies have found that spaying cats reduces the risk of mammary cancer by 40 to 60 percent.

Lightly skinned or white cats are susceptible to developing these tumors from sun exposure. The skin lesions tend to develop around the head and face, such as the tips of the ears, nose, eyelids or lips. These lesions may seem insignificant at first and they tend to spread (metastasize) slowly. If untreated the lesion may, over months or years, become more ulcerative and spread to other areas. Any suspicious sore should be checked by a veterinarian.

While these are three common types of feline cancer, other cancers should also be taken very seriously. If you notice your cat displaying unusual signs that might be cancer symptoms, AERA urges you to bring your cat to a veterinarian right away.

If your pet is diagnosed with cancer, your veterinarian may refer you to a veterinary oncologist for some form of treatment. Currently, many pet cancer treatments are similar to those used in humans. A veterinary oncologist will help you make informed, compassionate health care decisions for your beloved pet after a difficult cancer diagnosis.

If you live near Fairfield, New Jersey, you notice your cat or dog is suffering from any of the symptoms listed above, and your family veterinarian indicates cancer may be present, call AERA today at 973-788-0500 to make an appointment.