Honey’s Story: A Case Study from the AERA Surgery Department

Honey, a 9-year-old intact female Golden Retriever presented to the emergency service at AERA for an abdominal mass diagnosed by her primary veterinarian. A workup has been prompted by a sudden reduction in Honey's appetite.

Chest radiographs were normal and Honey was moderately anemic. Abdominal ultrasound suggested a complex mass not clearly associated with any organ including the spleen. The liver appeared normal. An echocardiogram revealed no evidence of pericardial effusion and the right atrium could not be visualized.

On physical exam the dog was bright and alert with pale mucous membranes & decreased peripheral pulse pressure. Cardiac rhythm was normal. The abdomen was distended with a palpable intra-abdominal mass. No ascites was noted.

Surgery was recommended and an exploratory laparotomy performed. At surgery, 500 cc blood were suctioned from the abdominal cavity. A large 12 lb mass was found originating from the right ovary! The tumor was purple, irregular and cystic, containing a large volume of blood. There was no renal involvement. Multiple clear cysts were found in both ovaries and the uterus was enlarged.  The mass was removed without incident and an OVH was performed. The mass was biopsied as was the liver and several omental masses. The abdomen was irrigated with warm saline then routinely closed.

Honey made an uneventful recovery and was discharged 3 days later!

Biopsies revealed a para-ovarian hemangiosarcoma with omental metastasis. No hepatic involvement was found. Referral to an oncologist was recommended for Honey to investigate further treatment.

The interesting fact about this case is the location of the main tumor. Most hemangiosarcomas arise from the spleen. The liver is the second most frequent site. Metastasis is common. 70% of patients presenting with hemoabdomen from ruptured splenic mass have HAS and may survive only a 1-2 months particularly if there is visible evidence of metastasis. Survival times may be longer in cases of microscopic metastasis given post-operative chemotherapy.

We are happy to report that Honey is fully recovered and is doing well at home with her family. 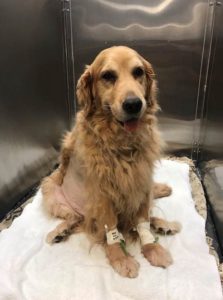