Our emergency department treats pets with a variety of medical conditions, but one problem brings pets through our doors over and over again—eating foods that get them into trouble. Dogs, in particular, cannot seem to resist eating things they find interesting or too tasty to pass up. In some situations, owners unknowingly feed their pets human foods that are toxic, or that trigger negative systemic effects. Ensure you know the foods that can be problematic for your pet to avoid an unplanned trip to our emergency room.

Foods That Are Toxic to Pets

A number of foods that are safe for humans are toxic for pets, and keeping a mental list of foods to avoid is important to keep your pet safe. Some of the most common offenders include: 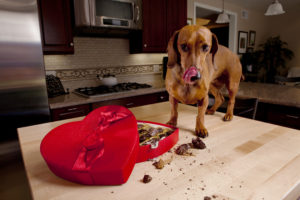 Chocolate is the most commonly ingested toxin, and the ASPCA’s Animal Poison Control Center (APCC) reports that chocolate toxicity comprises more than 10% of calls they receive, which equals approximately 60 cases per day. Chocolate is available in several forms, and is included in an uncountable number of candies, desserts, and other sweet treats. Although we see chocolate toxicity cases all year long, incidence increases during holidays that feature chocolate treats, such as Valentine’s day, Easter, Halloween, and Christmas.

Dogs are much more likely than cats to eat chocolate products, and approximately 95% of the ASPCA APCC’s chocolate cases involve dogs. Indiscriminate dogs will likely eat any chocolate they can get their paws on, although toxicity is significantly different between the four types:

Chocolate contains toxic caffeine and theobromine, which belong to a group of compounds known as methylxanthines. In toxic amounts, methylxanthines can cause significant toxicity, and affected pets display signs that may include:

In addition to toxicity, chocolate ingestion can cause pancreatitis, and gastrointestinal (GI) obstruction if your undiscerning pooch also gobbles down the candy wrappers. Chocolate can be fatal if your pet ingests a toxic amount, and is not treated promptly.

Non-toxic foods may also be unsafe for your pet. Foods high in fat content can cause pancreatitis, which is characterized by severe pancreatic inflammation. We typically see a rise in pancreatitis cases around the holidays, when people prepare rich, decadent meals that they share with their pets. Although any fatty food can trigger pancreatitis, commonly implicated items include:

When fatty food moves through your pet’s GI tract, her pancreas, which produces enzymes that break down fats, becomes overstimulated and releases an enzyme surge. In addition to causing local pancreatic inflammation, the enzymes initiate systemic inflammation that can cause life-threatening organ failure and sepsis. Pancreatitis signs in pets include:

If your pet displays pancreatitis signs, she should be evaluated by your family veterinarian or AERA’s emergency department immediately. Early treatment is critical to prevent severe dehydration, treat secondary infections, and combat systemic inflammation, and although most pancreatitis cases don’t progress to life-threatening severity, deadly complications are possible.  Moderate and severe cases typically require hospitalization, and intravenous fluids and injectable medications for recovery.

Since so many foods can cause your pet problems, sticking to pet food and pet-friendly treats is safest. If you want to occasionally treat your pet to a taste of your meal, limit her portion to a few bites of lean white meat, and vegetables, such as green beans and carrots. Consult your primary veterinarian if you have any questions about your pet’s diet.